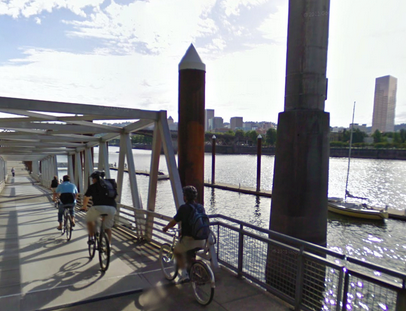 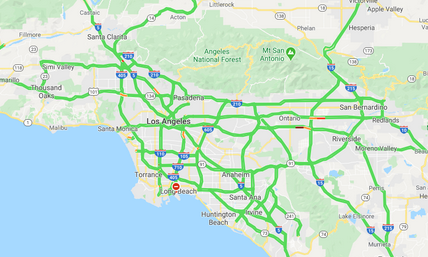 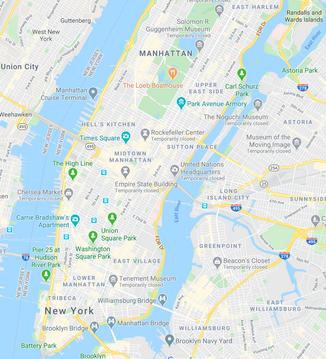 In many cities, mass transit systems guide the way: 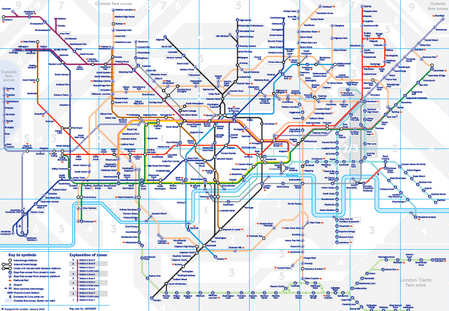 But in Portland, bicycle is king: 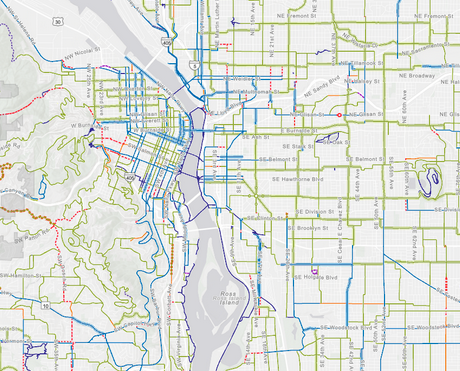 To the casual rider, Portland’s bike network is an interconnected system of bike-friendly streets, lanes, and paths. There are crossings, signs, markings, lighting, barriers, and other physical implementations that guide bikes through the city. 2

Portland's bike network does exactly what you'd expect: it gets you around. You just set off in a general direction and the network does the rest. Marked routes guide you along the way. You can expect routes to be relatively flat, minimally trafficked by cars, and free of excessive hangups.

There will be well-lit bike racks in desirable locations along the network so you can park your bike and explore. And you will want to explore. Portland's bike network winds directly through great neighborhoods with access to food, art, shopping, etc. This is a distinct advantage over many other cities, where urban bike routes are sent along lesser desirable routes, abandoned railroads, and other low value land.

I’ve heard that Portland’s bicycle infrastructure comes from a forward-thinking social movement that prioritizes bicycles and transit over cars and suburbanization. Whatever the root cause, it’s apparent that cyclists are a valued piece of Portland’s infrastructure and community in general.

Portland goes to great lengths to free riders from having to worry about details. Thanks to lots of hard work and planning, you can get most places on a bike in Portland by hopping on the saddle and keeping your eyes open.

Bike lanes are probably the most visible component of Portland’s bicycling framework. Color combinations, markings, and physical spaces set expectations for everyone about how bicycles will travel through the city.

SW Harvey Milk Street is a classic, albeit imperfect, example of a downtown Portland bike lane: 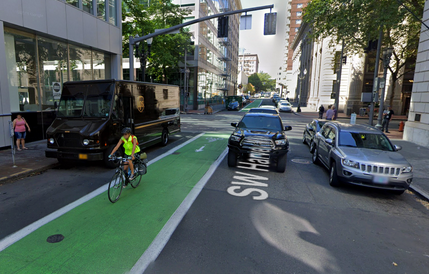 Through testing and iteration, Portland learned that placing some bike lanes between the curbs and parking spaces improves safety and flow: 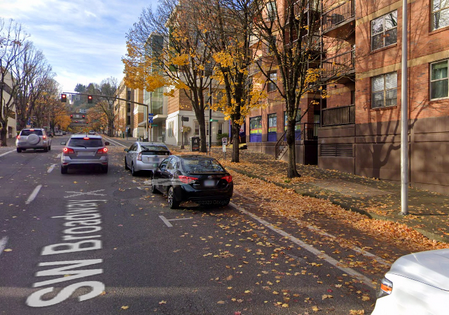 Communication and cues are also important. Consider this intersection in North Portland: 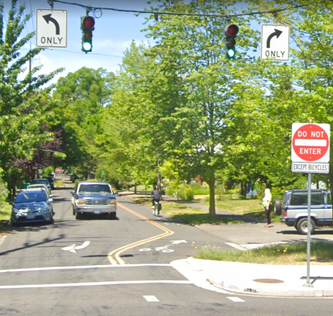 This leaves little doubt at what would otherwise be a confusing intersection. Portland does a terrific job using existing roadway communication standards (double yellow lines, bike lane signals, and signage) to free cyclists and cars from confusion.

In addition to dedicated bike lanes, Portland offers a series of less formal bicycle-aware routes. Outside of downtown and the busiest streets, a number of well-marked routes will guide you throughout the city.

“Sharrows” mark these routes, which wind through every neighborhood in Portland: 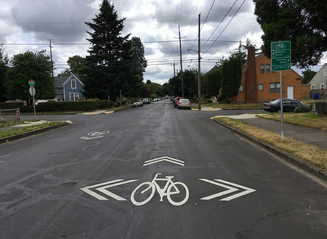 Sharrows legitimize and direct bicycle traffic through neighborhoods without formal bike lanes. Cars still use these roads. But bicycle awareness markers deter unnecessary traffic and increase cyclists’ visibility. Many bicycle awareness routes also include speed bumps to slow and further discourage car traffic. Over time, drivers learn not to use these streets for through traffic. It’s an elegant and cost-effective solution that opens the entire city to bike travel.

Crossings are another prominent feature. Need to get across Burnside (one of Portland’s busy east-west streets)? Many routes on the east side will direct you to this dedicated cyclist crossing at SE 41st Avenue: 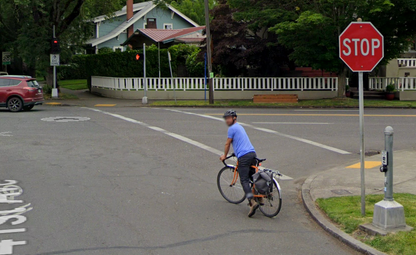 These examples barely scratch the surface of Portland’s bike-friendly transportation framework. What’s important is that the Portland framework is effective because it destroys complexity. It does this with well-communicated conventions honed through testing and iteration.

Portland’s bike network shows how culture takes a well-designed framework to the next level. 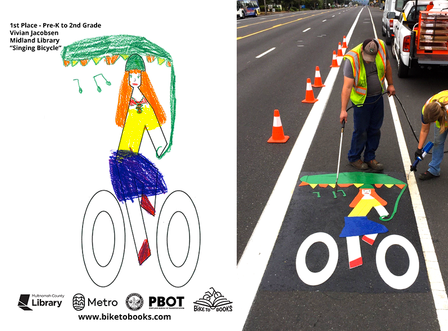 Modified markers (more examples here and here) are scattered throughout the city for cyclists to discover on their travels. The markers promote a cycling-friendly culture and increase community pride in riding.

Public art projects help connect cyclists with a broader culture in the city. For example, consider Portland’s many painted intersections. 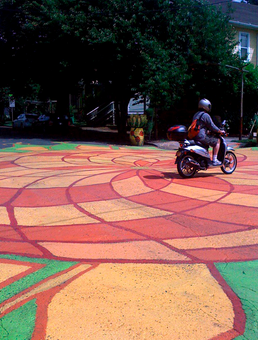 Setting out on a bike, riders encounter and interact with this public art. Shared experiences with art connect cyclists and place.

For better or worse, real estate developers seem to be leveraging this energy for their commercial gain. Consider the Peloton Apartments, 3 recently erected along the popular N. Williams bike route: 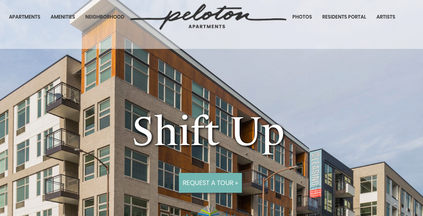 Portland also does a phenomenal job embracing counterculture to promote cycling in the city.

My personal favorite is zoobomb — a weekly downhill bike event. Rather than bringing bicycles to the event each week, riders began piling up bikes at the end of the route in what eventually became known as the “zoobomb pile.” 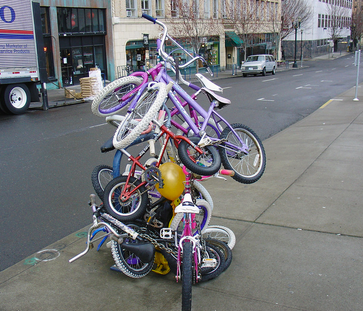 Other cities might issue citations or remove the bikes. Instead, Portland memorialized the practice in 2009 with a public sculpture called the “People’s Bike Library of Portland”: 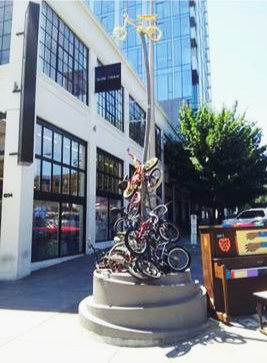 Prominent Portland bicycle activist Jonathan Maus praised the installation, calling it a “functional work of public art that will serve not just as a place to store Zoobomb bikes and equipment, but as a visual testimony to what makes Portland, Portland.”

A final, somber example is "ghost bikes". Ghost bikes are painted-white bicycles displayed in public places throughout Portland, usually to memorialize a cyclist’s death. Ghost bikes unite the city behind bicycle safety in an artful and memorable way. 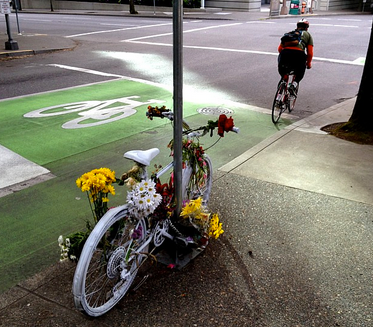 It’s About the People 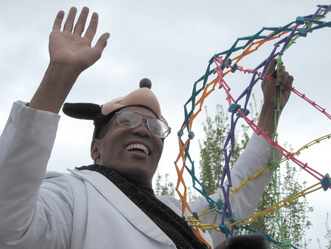 This is Kirk Reeves. Like thousands of people in Portland, I knew of Kirk from regularly riding my bike over the Hawthorne Bridge from downtown to SE. He was an entertainer you couldn’t miss. I didn’t give much thought to Kirk until I read of his death at Smith and Bybee Lakes in North Portland.

Kirk’s passing had an unexpected impact on me. What hit me initially was the location where he died. Smith and Bybee Lakes are on a popular bike route that goes through North Portland, ending up at Kelly Point Park. I’d ridden the route hundreds of times. Here was a person I was connected with, in his work and death, just from riding my bike around town.

As time went on, thinking about Kirk helped drive home something obvious: bicycling in Portland has always been about the people.

I spoke to very few people from my bike. I usually rode alone. But I was connected with my fellow riders. I was also connected with drivers, pedestrians, street performers, the environment, and the city itself.

I think David Byrne got it right in Bicycle Diaries when he wrote, “Safety is in getting along.” I’m grateful to Portland for building infrastructure and culture that helps people learn this in their own way. 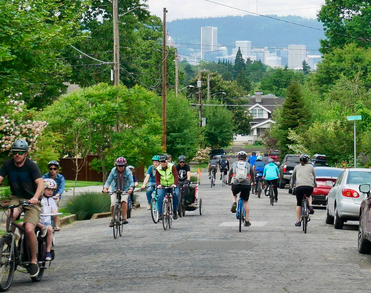 Sunday Parkways - SE Portland
(Source: Portland Bureau of Transportation)
1 For more on the social impacts of freeway building, I very highly recommend Working by Robert Caro (also a great book about thorough research, writing, and storytelling in general).
2 Similar systems exist in many other cities. The Wiggle is one famous route through San Francisco's thriving bike network. Minneapolis and Seattle also boast particularly expansive and thoughtful bike networks.
3 Peleton derives from the French word for 'platoon.'
Thanks to Stew Fortier, Richie Bonilla, and Dan Hunt at Compound Writing for reviewing a draft of this post.